March 25, the Independence Day in Greece 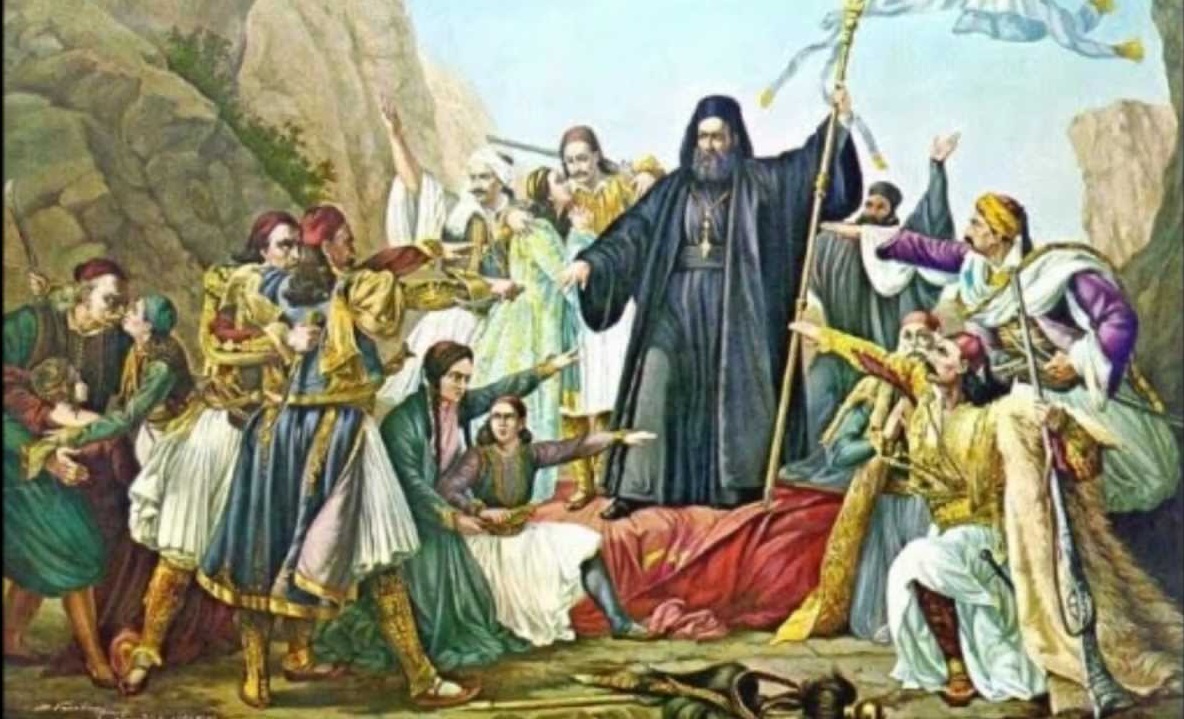 Posted at 16:47h in Culture by George Velivasakis

March 25 is both a national (revolution against the Turks) and religious holiday (Annunciation). March 25 is the nameday for Vangelis or Evangelos and Vangelio or Evangelia or Eva.

There is a school flag parade in every town and village and a big armed forces parade in Athens , the capital of Greece .

The Byzantine Empire fell to the Turks in 1453 and the Greeks remained under the Ottoman rule for nearly 400 years. During this time their language, their religion and their sense of identity remained strong.

On March 25, 1821 the bishop Germanos of Patras raised the Greek flag at the Monastery of Agia Lavra in Peloponnese and one more revolution started against the Turks. The people of Greece shouted « Freedom or Death » and they fought the War of Independence for 9 years (1821-1829) until a small part of modern Greece was finally liberated and it was declared an independent nation.

The struggle for the liberation of all the lands inhabited by Greeks continued. In 1864, the Ionian islands were added to Greece; in 1881 parts of Epirus and Thessaly. Crete, the islands of the Eastern Aegean and Macedonia were added in 1913 and Western Thrace in 1919. After World War II the Dodecanese islands were also returned to Greece.

The case of Crete:

The powerful administrative and military presence of the Ottoman Empire, the populous Muslim community which constituted almost the half of the population and the absence of preparations by the Philiki Etaireia were not in favour of a successful outbreak of the Greek Revolution. Nonetheless, from the end of Spring the revolutionary climate started being formed, especially in inapproachable areas of Chania (Sfakia) and Rethymnon (Anogeia). The Ottoman authorities soon learnt about these movements and proceeded with atrocities against the Christians obviously to intimidate and prevent the outbreak of a revolt. These actions had the contrary result and soon armed conflicts took place in different parts of the island. Sfakia, Anogeia and other mountainous areas constituted the main revolutionary centres and despite the fact that the Ottoman forces continued to control all the forts and strong strategic points of Crete, there was still tension until the first months of 1824. However, from the summer of the previous year (1823) Egyptian troops had landed on Crete and within the next months managed to resist by all means, confronting with great violence the Christian population. Since, the ports of Crete were used by Ibrahim Pasha as naval bases for the operations in the Peloponnese.

After more than three years, immediately after the destruction of the Egyptian fleet at Navarino (October 1827), the Greek Revolutionary Administration first and then the governor Ioannis Kapodistrias favoured the creation of revolutionary centres in different regions so that these could be included in the boundaries of the Greek state which were under negotiation. Thus, the uprising in Crete was boosted and upto the end of 1828 successful operations legalized the Greek claims on the island although they could not achieve military prevalence. Two years later the Egyptian powers repressed once again the revolt in Crete.

Crete was liberated in 1897 and it remained an Autonomous Principality under prince George of Greece.

On December 1, 1913 the Union of Crete with Greece was finally achieved.-

The line pattern was chosen because of their similarity with the wavy sea that surounds the shores of Greece.The interchange of blue and white colors makes the Hellenic Flag on a windy day to look like the Aegean Sea. The Greek Square Cross that rests on the upper left-side ofthe flag demonstrates the respect and the devotion that Greek people have for the Greek Orthodox Church and signifies the important role of Christianity in the formation of the modern Hellenic Nation. During the dark years of the Ottoman rule, the Greek Orthodox Church helped the enslaved Greeks to retain their cultural characteristics: the Greek language, the Byzantine religion and generally the Greek ethnic identity. Today, Christianity is still the dominant religion among Greeks. Therefore the existence of the Cross is justified.

More about the Greek Flag