Posted at 16:46h in Architecture, Crete, Culture by George Velivasakis

Bioclimatic architecture of the 21st century resets the goal of human living in harmony with the natural environment.

Fascinated by the technological achievements of the 20th century, we built without limits, with the illusion that nature cannot punish us.

Now that we understood that we must build ecologically, it is useful to investigate our traditional architecture that was integrated in the ecosystem.

At the beginning of this paper, we present briefly the major components of contemporary bioclimatic architecture, with emphasis on minimizing the consumption of energy that is not derived from renewable sources, water saving, anti-heat provisions (considering the forthcoming climate change) and selection of building materials and techniques with ecological criteria.

Subsequently, we examine how each one of the above stated components of contemporary bioclimatic architecture, was realized in Greek traditional architecture and we present characteristic paradigms from various Greek areas.

This investigation is useful in:

a. promoting understanding of Greek traditional architecture through an ecological approach
b. enriching the contemporary bioclimatic architecture know-how, so that it can be creatively utilized

A. The major components of contemporary bioclimatic architecture

A2. Water saving
Water saving in buildings can be attained with the following methods:

Water saving in the surrounding landscape can be attained by permitting the soil to absorb rainwater to enrich the aquifer and allow the function of the hydrological cycle.
It is also important to choose planting belonging to the ecosystem of each area, that does not require frequent watering. 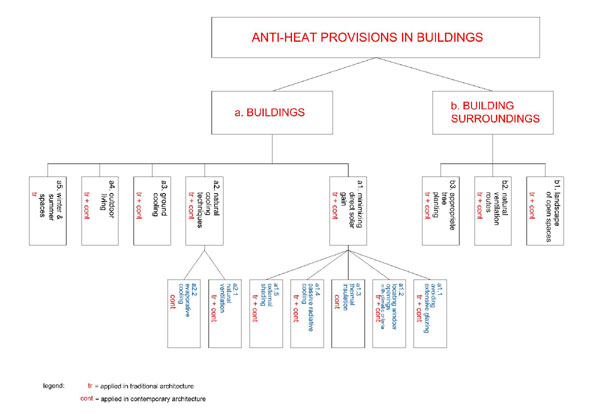 A3.a Bioclimatic building design
A3.a1 minimizing direct solar gain
The major source of unwanted summer heat is direct solar gain. One of the primary concerns in design should be minimizing the loads that impact our new buildings, thus ensuring the success of any potential cooling strategies.
Buildings should be designed with emphasis on:

A3.a3 ground cooling
The dissipation of the excess heat of a building to the ground is very effective, when building temperature is higher than ground temperature.

A3.b Bioclimatic design of building surroundings
A3.b1 landscape
Minimizing site areas covered with pavement is an antidote to the Urban Heat Island phenomenon.
A3.b2 natural ventilation routes
Buildings must be located so as to create free routes for natural ventilation.
A3.b3 appropriate tree planting
Trees must be suitable for the ecosystem of each area, provide proper shading and not disturb natural ventilation. Deciduous trees can be utilized more effectively.

B. The major components of Greek traditional bioclimatic architecture

B1. Minimizing the consumption of energy that is not derived from renewable sources
B1.a Minimization of energy consumption for building materials transportation
Through a disturbed ecological approach, we often choose materials that are friendly to the environment, but are imported from remote areas (e.g. wood imported in Greece from Indonesia). Energy consumed for transportation of materials, is one of the major factors that are responsible for environmental degradation.

The modern movement in architecture neglected localism and caused to increase this degradation.

When building materials with special properties were required, they searched out to import them from the nearest of the areas where they could be found.

Thick stone or brick walls had a great thermal mass.

There was often extensive earth contact, not only in semi – buried buildings, but also in buildings where some of their walls were in contact to sloping ground.

The basement of some houses was used as animal shelter. Animal heat warmed human living spaces on the above storey, as a heat transparent wooden floor separated them.

We shall refer to thermal insulation later.

B1.c2 Windmills
Windmills built from the 12th to the 19th century used wind energy for grinding grain. They were mostly built on islands that do not have waterfalls, while they have strong winds. Some windmills were built in the mainland too.

B2.a Cisterns
Water saving in traditional buildings in areas with no rivers and water springs, is realized by collecting rainwater in cisterns. Cisterns were constructed in the basement of the building or in outdoor area near the building. Outdoor cisterns are roofed. 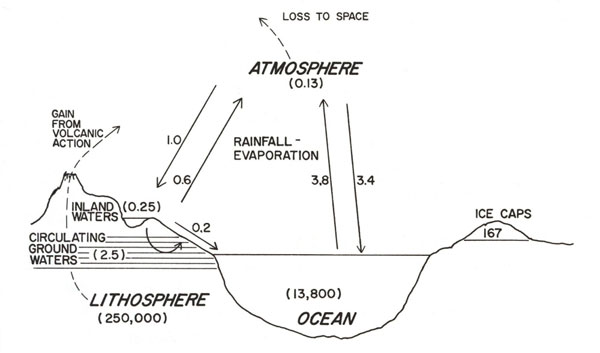 In the Greek area, particularly south of the 39th parallel, one of the main objectives of the traditional architecture was to avoid overheating of the buildings.

B3.a1.4 passive radiative cooling
In Cycladic islands (in the Aegean Sea) building cells are painted absolutely white. Continuous whitewashing maintains this absolute white. Consequently the greatest percentage of long wave sun radiation is reflected and does not over warm the buildings.
Recent research worldwise concludes that we must paint white at least the roofs of buildings or apply white coverings. Scientists refer to the successful white painting of buildings, applied in the Cycladic islands and in other Mediterranean areas.

B3.a2 natural cooling
B3.a2.1 natural ventilation
Main window openings were placed, if possible, at the southern or eastern external walls of the building and small openings were created at the top of external walls, opposite the main openings and preferably on the northern walls.
During summer etesian winds, they left the windows open and wind flow entering from the small northern windows run through the building, cooling it.

B3.a3 ground cooling
Passive ground cooling is provided during the warm periods in semi – buried buildings and in buildings where some of their walls are in contact to sloping ground.

There are many semi – buried buildings in Thira (Sadorini) island where excavation of volcanic earth is easy. 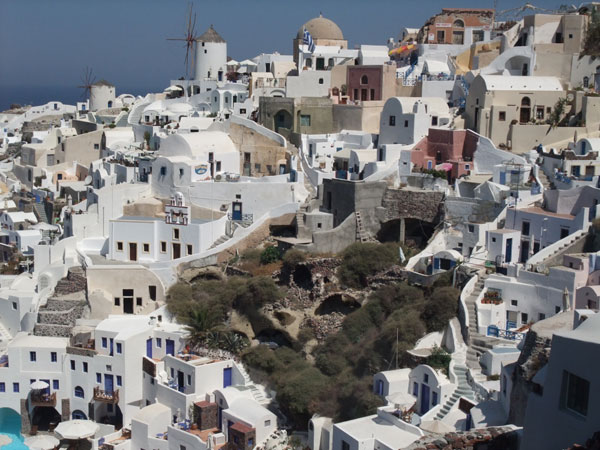 B3.a4 outdoor living
A famous Greek author wrote that Greek living, is outdoor living.
Particularly, south of the 39th parallel, the climate is so friendly, that people avoid most of the year the internal built spaces, preferring to live in roofed spaces that have at least one of their sides open to the natural environment.

Designing semi-open-air spaces with appropriate orientation was a critical bioclimatic option, as it created pleasant and healthy living, when the weather was not bad, without need for expensive constructions and without energy consumption.

It is astonishing that semi-open-air spaces exist in Greece continuously from ancient times till now.

Winter living rooms were positioned in the lower storeys, behind thick external walls with small openings.

Summer living rooms were positioned in the upper storey, behind thin external walls with large openings and they had proper orientation. Overheating was avoided through:

B3.b Bioclimatic design of building surroundings
B3.b1 landscape
Limiting pavement area to the minimum essential, overheating is avoided. This also contributes to the proper functioning of the hydrological cycle.

In Cycladic islands the perimeters of each paving slab and their joints are whitewashed. This is a great percentage of the total pavement and heat absorption is limited.

One of the criteria in creating the layout of Greek traditional settlements, is the protection from the wind or the utilization of the wind for cooling and clearing the settlement, depending upon local characteristics.

The serpentine layout of the narrow streets of the traditional central settlement of Mykonos island, is a characteristic example, as it fully utilizes the etesian summer winds to cool both the settlement and each building and also to remove atmospheric pollutants.

B3.b3 appropriate tree planting
It is obvious that they selected planting belonging to the ecosystem of each area.

They used trees, arbors and other planting to create shadow.

Deciduous trees were used to create shadow during summer and not to disturb sun penetration during winter.

They never disturbed with planting the wind flow that was required for cooling.

– were recyclable
– were users friendly
– their extraction did not damage the natural environment.

by Christis Floros, Architect
This presentation is based on a paper by architect Christos Floros, which was presented in the 1st Greek – Chinese Forum on the environment, in the Technical Chamber of Greece, 3 – 4 / 12 /2009.