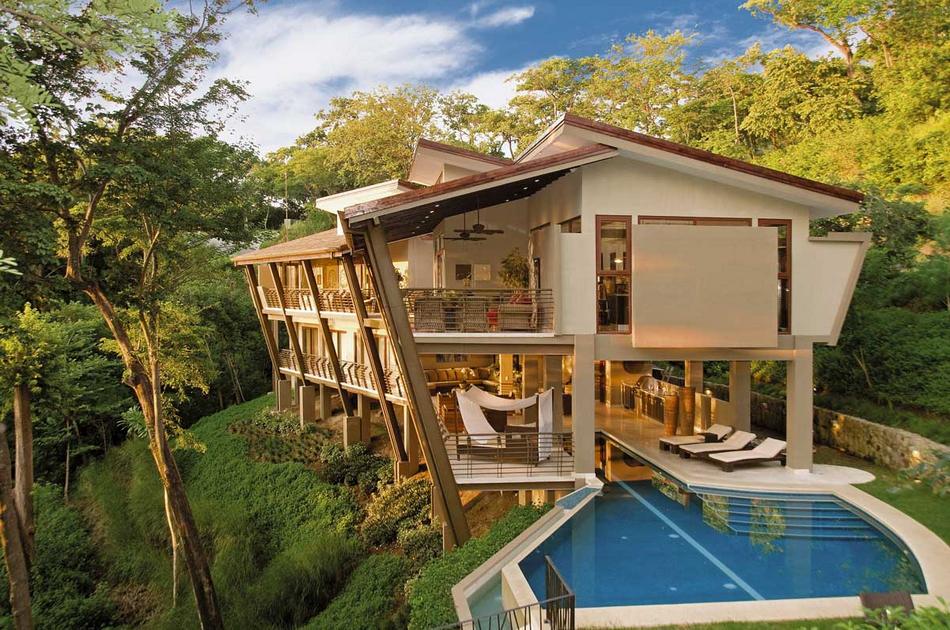 Mukesh Ambani, the fifth richest man in the world and head of the Mumbai based petrochemical giant Reliance Industries is estimated to be worth somewhere in the region of $43 billion. He is also the owner to-be of a 27-story skyscraper in downtown Mumbai that is to cost him colossal $2 billion! His wife Nita Ambani was staying in the Mandarin Oriental in New York and was so impressed with the interior Asian style decor that she wanted something similar for her to live in. What resulted from that is the world’s largest and most expensive home ever. Every story in the Antilla’s skyscraper home will be built to a different specification. The vast variation of materials to be used in its build has tremendously added to its overall cost. The meticulous planning that has gone into this architectural design is astounding and once the 27 -story tower is built it will certainly become a spectacular site for all eyes. Hirsch Bedner Associates are the designers behind this project. (Source)

Updown Court, England – The most important private residence to be built in England since the 19th century

Updown Court is situated only 25 miles from London, and through a pair of large sophisticated iron gates, one can see a palatial construction of immense scale and beauty. The property, however, is best known for its price tag: more than 85 million British pounds (+$150 million U$, with 103 rooms, five swimming pools and 24-carat-gold leafing on the study’s mosaic floor. There’s a squash court, bowling alley, tennis court, 50-seat screening room, heated marble driveway and helipad. Eight limousines will fit in the underground garage. Then there are the neighbors, who include the queen (at Windsor Castle) and Elton John. It is listed with Savills and Hamptons International. So, even if your blood doesn’t run blue, with enough green you can still live near—and like—royalty! (Source)

Versailles, Florida – The largest family home ever built in the US

This 30 bedroom mansion boasts its own bowling alley, roller skating rink and Olympic sized swimming pool to make it the largest family home ever built in the US. Time share mogul David Siegel and his former beauty queen wife Jacqueline began building the huge estate three years ago. But with almost 18 months of work still to be carried out on the property they have put it on the market at $75m. Experts believe a further $25m needs to be spent before anyone can move in.

As well as 30 bedrooms the home would have 23 bathrooms with spectacular views over Lake Butler, about 20 miles from Orlando. The hand-built windows for the house cost more than £2m and other luxuries include a ballroom and a children’s theatre. There is a garage with enough space for 20 cars, three swimming pools, a large boat house, formal gardens, and a one-story gatehouse with an apartment. There is also a baseball field, two tennis courts, a 60 foot by 120 foot Grand Hall with a 30-foot stained glass dome, two grand staircases, a 37 foot by 30 foot kitchen, 10 satellite kitchens, a two-story wine cellar and a rock grotto with three separate spas behind an 80-foot waterfall. All 23 full bathrooms have full-sized Jacuzzis, 160 tripled paned windows and Brazilian mahogany French-style doors that alone cost pds2.million.

The property was called Versailles as the entrance was modeled after the Palace of Versailles in France. (Source 1 | Source 2)

For the woman with the most expensive pair of legs, it was only fair she also had one of the most expensive houses in the world. Mariah Carey apparently had no problem scraping together a nice down payment on this palace in Beverly Hills. The Fleur De Lys is among the world’s most expensive estates with an asking price of $125 million. Maria Carey’s new digs were built by a Texan billionaire on 5 acres; it is 41,000 square feet of pure diva luxury and will also be modeled after the most extravagant home of its time: the Palace of Versaille, the former home of Marie Antoinette. Surrounding the mansion are rolling lawns, ornamental gardens and mature trees, a 3,000-square-foot manager’s house, staff quarters for 10 people, a spa and pool with a pavilion, a championship tennis court, and a lavish garden folly. (Source)